Judith Holtebrinck was a long-time supporter of FoM and a close personal friend of several of us. When the renovated Mt Eden Methodist Church and Village Centre opened in 2010, Judith was appointed the centre manager, a position she held until just a few months before her death on 6 August 2017 at the age of 48.

Councillor Christine Fletcher is a board member of the Mt Eden Methodist Church Charitable Trust. She posted the following tribute to Judith on Facebook on 11 August, the day of Judith's end-of-life celebration at the church.

It was with great sadness the Mt Eden community came together today to farewell Judith Holtebrinck, a fearless and visionary campaigner whose contributions to improving the quality of life in our Mt Eden community, and in Auckland generally, are tremendous. While she never sought personal accolades for her considerable achievements promoting sustainability and inspiring urban development, all Aucklanders should know the champion who tirelessly, over many years, helped secure important policy changes that many take for granted today.


Judith and I first met when I was Mayor of Auckland City. Her passionate advocacy for waste minimization and planting fruit trees on public reserves and berms were infectious and resulted in a wonderful legacy of green across the city.


She was a part of the Transition Town movement in Kingsland and wanted to plant fruit trees that everyone could enjoy and also because of rising food prices. In her own words: "It's a nice thing to do for the community. The idea is that kids on the way to school can pick a piece of fruit or have trees near playgrounds."


As a founding member of The Mount Eden Village People, along with Michele Donovan, Sara Rishworth and Gail Batten, the group focused mainly on four projects – fruit tree planting, minimising waste, establishing a community garden and holding workshops on growing food. One of their first goals was to make Mt Eden the first plastic bag-free suburb in Auckland.


The landscape photographer had noticed bags turning up as rubbish in unexpected and really remote places like Rangitoto. She spoke to the local business association and put on a photography exhibition to help raise awareness.


The strategy for minimizing waste was another joint community effort. Judith persuaded the merchants in Mt. Eden Village to get involved with the campaign. Today, cafés in the village donate their coffee grounds which are used for gardening; a pig farmer collects leftover produce from a local fruit and vegetable shop; while a goat owner collects deli leftovers. The group also set up battery recycling stations at Civic Video and the MBE Copy Shop.


According to Judith, "By changing the environment people will realise there are opportunities to recycle and make the changes at home as well."


I regret that some of this progress has been lost with the amalgamation of the Auckland Council. But I also believe this will change over time because Judith’s work and examples of what can be achieved when people in communities work together, are a legacy to be drawn upon in the future.


Aucklanders should also know of her inspiring leadership in establishing Mt Eden Village Centre. This precious asset, so hard fought for by our Mt Eden community, is the result of a partnership between the community, Council and the Methodist Church. Such partnerships can make for challenging governance. It took an outstanding leader such as Judith, by gentle persuasion and regard for all parties, to make the Centre a reality.


Judith was both a leader and a teacher. What I loved about her particular style of leadership was her inclusiveness, kindness, generosity and thoughtful respect for everyone. These are so important in a city such as Auckland where diversity is a cornerstone of our growth and development.


I hold this marvellous woman in the highest professional and personal regard. We salute you, and thank you from the bottom of our hearts, Judith. We have lost a champion, but your legacy will long endure. 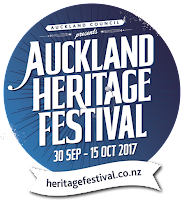 On Saturday 7 October, Friends of Maungawhau chairperson Kit Howden will lead a guided walk from Parnell's Holy Trinity Cathedral to the summit of Maungawhau and Mt Eden Village.

Meet us at Terry Stringer's Mountain Fountain in the cathedral forecourt at 10:30 am.

Discover walks and waterways, reserves and rock gardens. Find out how the city has developed, and look at issues related to intensification and the protection of green space in Auckland. 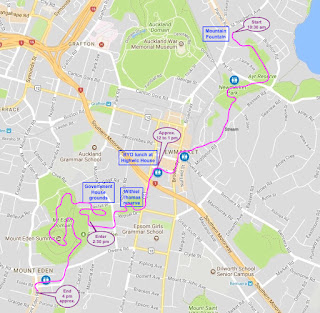 You can choose the whole walk (about four hours) or join us partway. Bring water and lunch to eat in the grounds of Highwic House (optional entry inside the House costs $8).

In the afternoon we'll visit Withiel Thomas Reserve and Government House grounds and garden. Our gardener guide will meet us at Savannah Place at 2:00 pm.

You can read about the Mt Eden rock forests in this interesting article in the New Zealand Geographic magazine.

Thank you, Albert-Eden Local Board!

We acknowledge a "quick response" grant of $544 this year from the Albert-Eden Local Board for purchase of a saw, saw blades, and 50 pairs of gloves. Thank you for your support. We have already made good use of the saws and gloves. 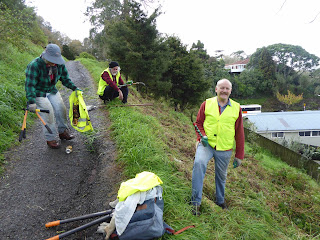 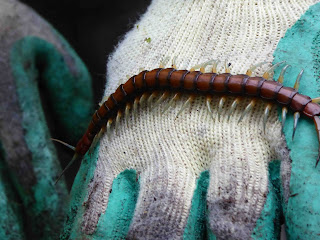 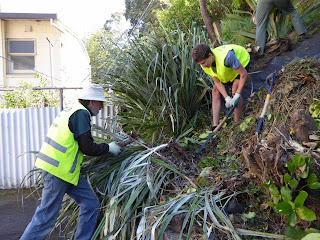 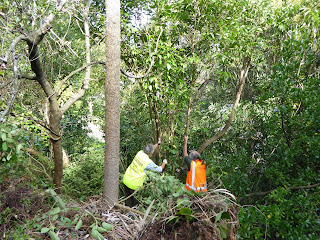 Email ThisBlogThis!Share to TwitterShare to FacebookShare to Pinterest
Labels: Albert-Eden Local Board, Friends of Maungawhau, Maungawhau

On Saturday 12 November 2016 several Friends of Maungawhau were among the large crowd gathered at the Blockhouse Bay Boat Club to celebrate the life of Dr Susan Bulmer, pioneering archaeologist in New Guinea and New Zealand, founder of the Friends of Maungawhau and namesake of the hefty New Guinea fruit bat, Aproteles bulmerae.
Sue Bulmer (née Hirsh) was born in Ithaca, New York and grew up in California. It wasn't until 1957, the year she arrived in New Zealand as a 24-year-old Fulbright scholar, that she got properly hooked on archaeology. Her earlier studies at Cornell University (BA) and the University of Hawaii (MA) were in anthropology. Sue had been introduced to field archaeology in Hawaii, and once in New Zealand she leapt into excavations in Auckland and field trips to the Coromandel. By all accounts, it was the music making and camaraderie as much as the excitement of digging that fuelled her enthusiasm. In 1958 she enrolled for MA studies in archaeology at Auckland University under Jack Golson, an early champion for Auckland's volcanic cones and the only archaeologist on the university staff at that time.

In 1959 Sue began her pioneering archaeological fieldwork in the New Guinea highlands, initially in the company of her newly-wed husband, anthropologist Ralph Bulmer. In the years following their return to New Zealand in 1960, Sue had three children (Alice, David and Kenneth) in quick succession, delaying completion of her MA until 1966. The family spent another five years in Papua New Guinea. Sue's research in Port Moresby became the basis of her PhD which she began in 1973 and completed in 1978, mainly to improve her chances of securing a position at a university or museum. Her marriage, however, was not a match made in heaven. She and Ralph divorced in 1980.

Outspoken and far-sighted, Sue was an independent scientist for most of her career, apart from 15 years at the New Zealand Historic Places Trust (now Heritage New Zealand) and the Department of Conservation from 1979 until her retirement in 1994. As the HPT's first Northern Regional Archaeologist, Sue built up a team of more than 20 archaeologists and contract staff who carried out many site surveys in the Auckland region and brought a strong focus on archaeological research to the HPT's role.

Sue first encountered Auckland's volcanic cones in 1957 on a bus tour for members of the newly-formed Auckland Archaeological Society. When Thor Heyerdahl visited the major Auckland maunga in 1965, he was surprised that none had ever been mapped. It was Sue who in 1978 produced the first archaeological map of Maungawhau, from survey work done by graduate students. Her map was published in the 1986 Management Plan for Maungawhau and is reproduced in our book, Maungawhau: a short history of volunteer action (2014). It is also available on our website, along with Sue's 2008 descriptions of the pā layout. Sue used to bring copies of her map to our meetings and urge us to mark anything of historical interest we might be lucky enough to discover.