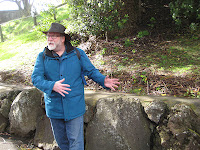 Yesterday, instead of weeding the maunga as usual on a Tuesday, some of us joined a geology tour of Maungawhau, hosted by the Auckland Geology Club and led by Garry Carr, science teacher at AGS, as part of the Auckland Heritage Festival.

The hypothetical nature of the science about what lies beneath the ground surface, or even visible on the surface, surprised me a little. It's still debatable, for instance, how many scoria cones there were on Maungawhau. Even the large basalt rocks in the wall that Garry's indicating here may not have come from Maungawhau (though they probably did). And there's "no pattern whatsoever" in eruptions from Auckland's volcanic field, Garry assured the anxious among us.

Interesting too to learn that large boulders always mark the "toe" of a lava flow, as evident on the stoney hillock, an off-leash dog area, next to the playground at the northern boundary. 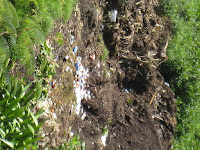 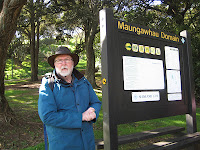 Having walked up the maunga from Tahaki Reserve, we returned via the steps to Mountain Road, then round Stokes Road and Clive Road. Where we spotted a more recent sub-surface feature, possibly a rubbish dump though we now know better than to make definitive claims, at the south-east corner of AGS's playing field. Just like the old days, huh...