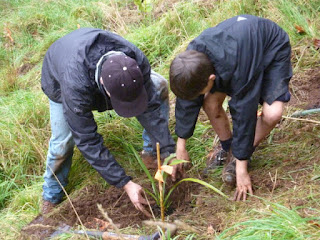 Sunday's planting day went remarkably well despite intermittent rain. Including six of the "usual suspects" – Dorothy, Jeremy, Sel, Kit, me and Keith – there were 23 workers, and they certainly did work. Not a shirker among them; a diverse bunch, each one with a particular skill.

We arrived to find Kit had the plants attractively grouped and labelled, and had numbered the planting sites up the track above the Rautangi Rd entrance, using plastic tags funded by the Albert-Eden Local Board. The Local Board has also provided funding for 60 pairs of gardening gloves for our regular Tuesday weeding sessions.

On reaching the site we found Kit's son had been busy planting a sizeable "demonstration patch" which gave us an excellent model to work from. Our newly-purchased planting spades (courtesy of Auckland Council) made the job easier, but it was still heavy, dirty work. 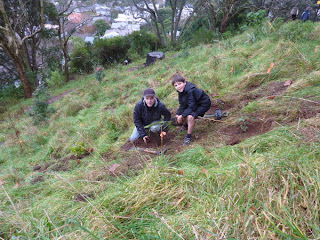 "Child labour" by four young boys was gratefully accepted. The mother with them explained cheerfully that their Dalmatian heritage means they are genetically programmed to dig; I later heard Sel saying to one boy, "You do realize there is no (kauri) gum here?"

Tea break was welcome, with the "Benghazi boilers" doing their usual efficient job. A slight glitch occurred just as the boiling water began splurting from the spouts and amid general anticipation we reached for the tea – Keith and I had one of our "I thought you packed it" moments, rapidly resolved by offering coffee while Keith dashed home to get the tea. The mini chocolate bars were popular, as were the discount vouchers from Casa del Gelato in Mt Eden village, even if some of us were mildly hypothermic by this stage.

Kit gave a brief talk on what FOM do, and current issues with Council.
A great morning's work, with over 300 plants in the ground. Some people even had enough energy left to walk the track and see our patch; all said they would come to future planting days.

Footage of the car being removed from the crater, care of the Central Leader.
Posted by kat who comments on your blog at 11:12 AM 0 comments 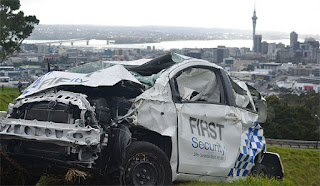 There wouldn't be any need for 'security' patrols if all vehicles were banned from the summit. A ban would eliminate the theft problem and protect the maunga from this kind of idiocy. What puzzles us is why the vehicle was on the summit in any case. Isn't the gate on Mt Eden Rd supposed to be closed at 11pm? What if this had happened in summer, and the car had caught fire? 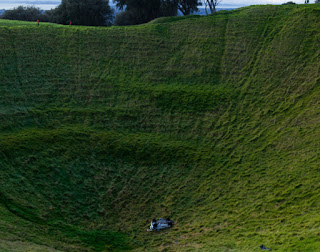